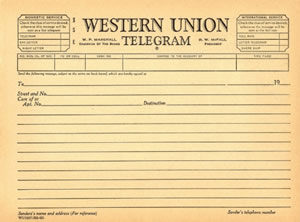 Singing telegrams have been around since the early 1900’s.
We are bringing them back in the 21st century in a new, innovative way, by customizing them as upscale “Melody-gram” songs.

Western Union, the American telegraph company began offering singing telegram services in 1933. On July 28, 1933, a fan sent Hollywood singing star Rudy Vallee a birthday greeting by telegram. George P. Oslin (1899–1996), the Western Union public relations director, decided this would be a good opportunity to make telegrams, which had been associated with deaths and other tragic news, into something more popular. He asked a Western Union operator, Lucille Lipps, to sing the message over the telephone, and this became the first singing telegram.
While Oslin created the singing telegram because he thought “that messages should be fun,” he recalled that he “was angrily informed I was making a laughingstock of the company.” 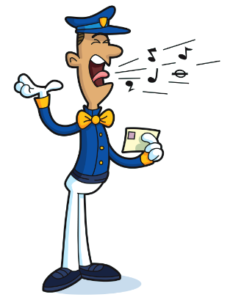 We bring Singing Telegrams into the future with our customized, one of a kind Melody-grams… music-grams for all occasions, delivered in person or over the phone https://sweetmelodygrams.com